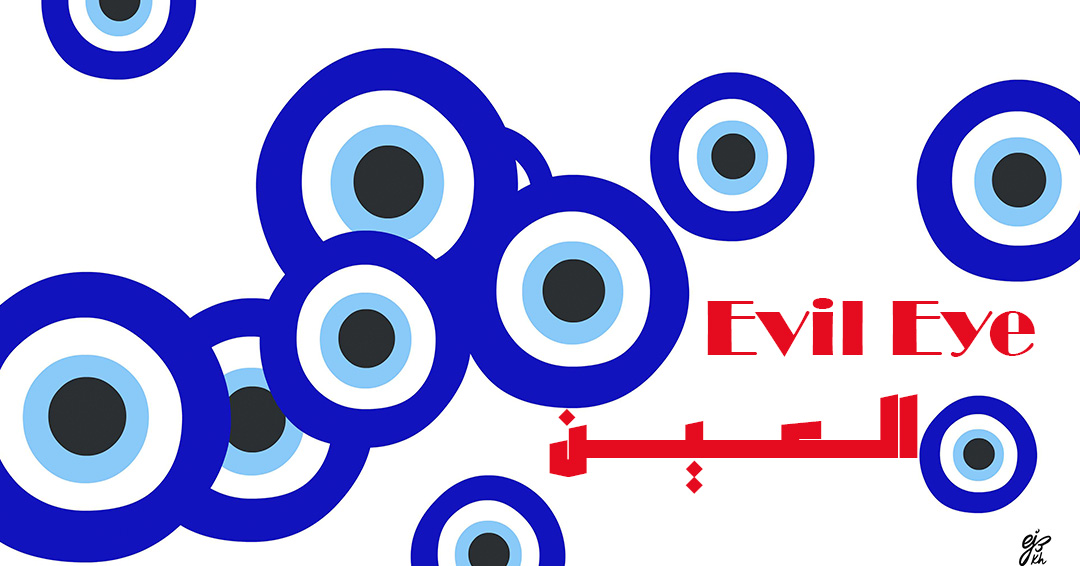 Motion graphic artwork with title “The Evil eye” which is about the symbol of the iconic eye evil symbol is present across various religions and cultures, but most significantly in the Jewish, Muslim, and Christian faiths.

The motion graphic artwork can view below with some facts and information about the evil eye.

What is exactly it is a supernatural belief in a curse, brought about by a malevolent glare, usually given to a person when one is unaware.

The evil eye dates back about 5,000 years, as early as the Upper Paleolithic Age. The evil eye is one of the strongest and most powerful ancient symbols in the world. If you’re curious about the evil eye’s meaning and history, learn more about it here!

The symbol of the iconic eye evil symbol is present across various religions and cultures, but most significantly in the Jewish, Muslim, and Christian faiths. The earliest known belief in the power of the evil eye predates ancient Roman and Greek times’ classical antiquity.

In Islam, the evil eye, or al-’ayn العين, also عين الحسودة), is a common belief that individuals have the power to cause harm to people, animals or objects, by looking at them in a way that indicates jealousy, with an envy (Envy is most often used to refer to a covetous feeling toward another person’s attributes, possessions, or stature in life as they would desire to have a quality, possession, or other desirable thing belonging to (someone else) with desire of remove a quality, possession, or other desirable thing gone from that person.) activates the evil eye, this happens (or usually happens) unconsciously, and the person who casts it is not responsible (or usually not responsible) for it.

You can find the evil eye mention in the An-Nisa' the the fourth chapter (sūrah) of the Quran, specifically in verse (āyā) 32 which

English Translated by website quran.com (https://quran.com/an-nisa/32) as “And do not crave what Allah has given some of you over others. Men will be rewarded according to their deeds and women ˹equally˺ according to theirs. Rather, ask Allah for His bounties. Surely Allah has ˹perfect˺ knowledge of all things.”

The English translated by website quran.com (https://quran.com/al-falaq) as “and from the evil of an envier when they envy.”

Part of Islamic etiquette and rituals to ward off the evil eye to say either:

Also in Christianity, the evil eye (also known as evil eyes) is seen as sin that person does to another person, as they believe that Cain has envy his brother Abel as well the Josepha was envy by his siblings. Even Jesus (Isa in Islam) was envy by Kohen (Jewish priest) which lead to his death as Christianity believes. In end of the gratitude/ thanks prayer they would mention envy and release it as the following sentence “I come against every spirit of bitterness and anger that I always experience whenever”

Also we can find many text mention envy in the bible as following:

While in Judaism, the “evil eye,” ayin ha’ra in Hebrew, is the idea that a person or supernatural being can bewitch or harm an individual merely by looking at them. The belief is not only a Jewish folk superstition but also is addressed in some rabbinic texts,for example in Rabbeinu Bahya, Bereshit 30:38:5 mention the evil eye , as translation of this verse as do not question how it is possible that the power of the evil eye is so great that it can even interfere with miracles! We find that the birth of Yaakov’s children was influenced by the power of the evil eye.

The evil eye is mentioned several times in the classic Pirkei Avot (Ethics of Our Fathers). In Chapter II, five disciples of Rabbi Yochanan ben Zakai give advice on how to follow the good path in life and avoid the bad. Rabbi Eliezer says an evil eye is worse than a bad friend, a bad neighbor, or an evil heart.

The Evil eye symbol as artwork

The evil eye concept as has been mention is believe across various religions and cultures, however, the iconic symbol of evil eye is it an amulet that will protect you from their ill intentions as needs to differentiate between the amulet of evil eye and the evil eye itself as concept.

Though often dubbed as ‘the evil eye’, the ocular amulet is actually the charm meant to ward off the true evil eye: a curse transmitted through a malicious glare, usually one inspired by envy. Though the amulet – often referred to as a nazar – has existed in various permutations for thousands of years, the curse which it repels is far older and more difficult to trace as BBC Culture has been mention in their article “The strange power of the ‘evil eye’”

The eye’s history is far-reaching and intertwines with many peoples, so many of the modern users do in fact hold a connection to it in terms of heritage;

Although the symbol may have the ability to transcend boundaries – be they cultural, geographical or religious – it may be worth considering its meaning beyond a mere trinket or fashion statement. The evil eye is a remnant from the very dawn of civilisation, harking back to some of humanity’s most enduring and profound beliefs. To wear an amulet flippantly without such knowledge might not only render its protective abilities useless, but incur an even more potent curse – if that’s something you believe in, of course.

The concept is well captured by Heliodorus of Emesa in the ancient Greek romance Aethiopica, in which he writes, “When any one looks at what is excellent with an envious eye he fills the surrounding atmosphere with a pernicious quality, and transmits his own envenomed exhalations into whatever is nearest to him.”

it’s no surprise that the people of these ancient civilizations sought out a means to repel it, which led to the earliest iterations of the nazar amulet that we know today.

Dr Nese Yildiran, told BBC Culture that “The earliest version of eye amulets goes back to 3,300 BC,” who is an art history professor at Istanbul’s Bahçeşehir University. “The amulets had been excavated in Tell Brak, one of the oldest cities of Mesopotamia – modern day Syria. They were in the form of some abstract alabaster idols made with incised eyes.”

While the alabaster idols of Tell Brak seem to be one of the oldest eye amulets discovered, they are a far cry from the typical blue glass we know today, the earliest iterations of which didn’t begin appearing in the Mediterranean until around 1500 BCE. How were these early prototypes of Tell Brak distilled into the more modern versions?

“The glass beads of the Aegean islands and Asia Minor were directly dependent upon improvements in glass production,” Yildiran explains. “As for the colour blue, it definitely first comes from Egyptian glazed mud, which contains a high percentage of oxides; the copper and cobalt give the blue colour when baked.”

Yildiran makes reference to several blue Eye of Horus pendants excavated in Egypt, asserting that these could in a way be seen as the most influential predecessor to the modern nazar. According to Yildiran, early Turkic tribes held a strong fascination with this shade of blue because of its connections with their sky deity, Tengri, and likely co-opted the use of cobalt and copper as a result.

The blue evil eye beads underwent a widespread circulation in the region, being used by the Phoenicians, Assyrians, Greeks, Romans and, perhaps most famously, the Ottomans. Though their usage was most concentrated in the Mediterranean and the Levant, through means of trade and the expansion of empires the blue eye beads began to find their way to all different corners of the globe.

What’s most fascinating about the evil eye isn’t its mere longevity, but the fact that its usage has deviated little over the course of millennia. We’re still affixing the evil eye to the sides of our planes in the same way that the Egyptians and Etruscans painted the eye on the prows of their ships to ensure safe passage as what said in BBC Culture.

The question is do you see the evil eye icon symbol as evil eye or as the amulet that protect you from evil eye or it is just an artwork that you enjoy ?!! or the meaning depend on the eye which view it ?!